Troubled ramblings of discontent in black and white…

This might be the season when Max’s pragmatism truly sucks the life out of even those who have clung tightly to his collection of titles won at the club, whilst nervously looking on as the performances have continued to worsen. He has his fair share of detractors. Yet his vast improvement in Europe over what Conte achieved and the steady success domestically has been enough to gloss over the despondent squeals of those few who have grown increasingly apathetic and concerned of the absence of any clear direction of squad development or style.

To be avoiding playing Costa and Dybala from the start, placing Cuadrado at RB and continuing with Khedira as a ghost sloth is tantamount to some form of treason to the passionate parts of my nature which are black and white.

Before an international break also, with zero concern for saving fitness for important fixtures on the horizon…We are terrible to watch.

Our transition from defence to attack is so slow, so laboured, so obvious, that the opponents can literally move back behind the ball at walking pace. Parma did not need to charge back, they barely needed to stroll to wait for us to pass the ball laterally many times then apply the same telegraphed focus on the flanks then balls hopefully flung into the box.

It is painful to watch. Predictable and presently, even though its very early days, we have regressed as a side and do not look in any way convincing enough to retain the scudetto let alone seriously challenge for the Champions League. Plenty of not just better to watch sides but far more balanced, rapid in transition, creative, direct and pacy sides are to be found in Europe. And Napoli could well add steel to their beautiful football domestically…

The Parma match provided more dire stuff with a game barely won in any way handsomely nor clearly on merit, but through a brief flurry of individual quality and a bout of good fortune. And this was against a side who matched us, and at times played more organised, cohesive, direct football, other than the period directly after half time, when Max must have asked them to get the ball forward much quicker. Which finally allowed the team to show hints of the side they could be. Just hints. There was not much domination of a side hugely inferior to us on paper, yet clearly far more comfortable in their system.

Do we have a system?

I believe we do not. Which cannot be put down solely to Max trying to find the best fit for Ronaldo. Despite the at times desperate need to find him, most of the players on show have been at the club for a long time. They should know their roles more clearly and confidently.

The decision to continue playing Khedira is killing this side. He offers virtually nothing for vast periods of every game he features. The defence is left horridly exposed for he has not the legs or natural defensive zeal to cover adequately. He offers barely any physical presence in the middle, where only Matuidi and Pjanic seem willing to get stuck in. The German simply waits for opportunities to get involved in the final third. Sometimes grabbing a goal, often doing nothing more than finding 2-3 good positions in the 18 yard box. He is one paced and dragging this team down. To have seen Marchisio leave and Khedira remain may well come back to haunt us horribly this season. His low level of performance not only leaves gaping holes in the midfield, it also undermines Pjanic terribly. It shackles him into an uncomfortable defensive midfield role which is as frustrating to view as it is for the player to try fulfil.

I am also horrified but unsurprised by seeing Dybala and Costa on the bench. The latter was showing truly world class form in the second half of last season. He was not overly used at the World Cup. Dybala didnt play a single minute. And I worry that if he doesn’t get the chances his talents deserve that he will leave. The irony of seeing him go to Real, and prospering into a global star whilst we have Ronaldo toiling away against 5 defenders until his mid 30s will be…hard to bear. Yet is entirely possible.

Juan Cuadrado does not have the intelligence or physicality to play as a fullback. Perhaps he could be a back-up option there in a back 5. Never in a back 4. Time and time again we are caught out with him high up the field leaving Bonucci and Chiellini up against multiple attacking opponents. This cannot be allowed to continue. His tackling is also generally feckless.

Cancelo has been encouraging, and Bernardeschi has shown a lot of hustle, other than which I find far more negatives with our early season form than positives. 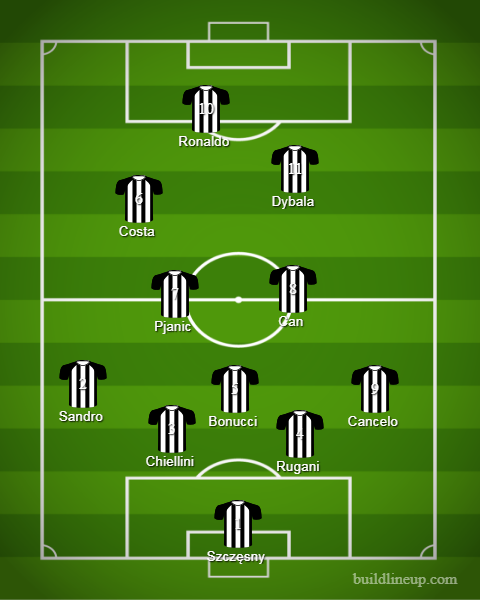 Bonucci, as he did so well for so long in his previous stint for the club, steps up to create and support Pjanic as a deep lying playmaker. Can moves box to box. Costa and Dybala can roam wide, come deep and support Ronaldo. With the fullbacks applying pressure down the flanks and Chiellini and Rugani keeping the rear-guard solid and uncompromising.

We need to focus not just on finding the best fit for Ronaldo, but the development of the side as a whole, which means getting Rugani, Costa, Dybala, Can, Cancelo all into the starting line-up.  Also offering Bentancur and Bernardeschi ample opportunity to blossom.

Yes yes, Mandzukic is a work horse who gives his all but to play him at the cost of Little Doug or Paulo massively drops our ability to create and connect the midfield and attack, also to attack with that all important pace, which every one of our opponents is using against us.

I am already losing my newfound, welcome excitement for the season. For we are too predictable, too slow, too unbalanced a side to produce the performances we all crave, and when the football on show is so haphazard and telegraphed I cannot believe the players themselves are enjoying the experience.

Simply put, we are not playing to our strengths. And the football is very poor to watch. I am enduring games more than enjoying them.

I hope the international break will give Max the time he needs to commit to some major changes in selection. We know the manager generally aims to condition the side early in the season, ideally to be well placed to reach a peak in the new year when the competitions become more serious and challenging. I accept this. However, I see not merely a few mild concerns due to players been given minutes mainly for fitness but obvious problems which are seemingly addressed by lessening our creativity and aiming to win matches through attrition, not the kind of football the signings we have made, the players and the fans deserve.

There is a tendency to lament at the cynical position I have taken, and to consider it alarmist. The results have been okay. We have won two away games at provincial clubs where it is often said the scudetto is won or lost for the top teams and despatched Lazio fairly comfortably who have caused us problems in recent times. And many of our finest players are not yet considered match sharp. All reasons to be hopeful, if not still cheerful.

Yet anyone who reads my columns regularly will understand when I assert that my concerns are nothing new or reactionary. They have been consistently expressed and explained.

I have not seen any obvious development of the squad other than in solid signings nor any improvement of the identity or style of play. This leads me to believe we have reached a plateau with Allegri. And its a shame that it happens when we have arguably the most exciting squad for many years at his disposal.

Still, I will look on the brighter side of optimism, against my best judgement, and believe it is possible that I will not spend the season holding onto the hope that we are the only side not yet achieving our potential, which places us at an advantage over those who have already peaked, for we have plenty of room to improve. Instead, we could see the midfield dilemma solved. Balance found. The marvellous talent that is brimming to burst in the current squad finding its perfect harmony of grit, technique and cohesion. With an assault on the CL title very much in our grasp come the business end of the campaign. We have the squad to achieve this, but do we have the right manager to get the best out of this squad? This season will answer that question.

We live in hope.

Juventus journalist Mirko Di Natale: "Today there is no price for Federico Chiesa, because the player cannot be sold"

Coming towards the closing days of the winter transfer market, many rumours have emerged regarding Juventus. the…
All StoriesEditorialsIntermercato

Well before the final whistle it was feeling like a humiliation. The home side were passing the…